Those words have been dreaded by parents, especially during the holidays, for decades. Why? Because of troubles with directions. 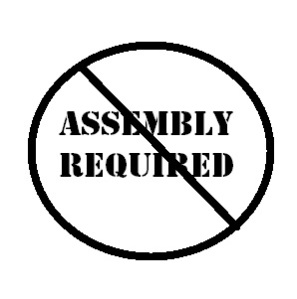 At one time or another, we all face putting something together while trying to follow incomprehensible directions. There’s an episode of the TV series Bones, “The Prince in the Plastic,” in which Angela is trying to put together a baby toy. The subplot follows how all these geniuses can’t understand the poorly written directions and can’t get the thing put together. She eventually has to take it back to the store and pay more money to have the toy put together than she paid for it!

Don’t get me wrong; writing directions well can be a challenge. Just sit down sometime and write, step-by-step, how to make a peanut butter and jelly sandwich. It is so easy to presume that the reader knows certain things: how to open the jars and that it requires two slices of bread. Now try to do that in a language that is not your native tongue. See the problem?

While helping my daughter assemble a toy (that had about a gazillion pieces) for her children this past holiday season, I encountered a new twist – picture only directions. That’s right; no writing.

“Great! You can’t misinterpret pictures,” we all think.

Wrong! What we found was that picture-only directions leave some information out, like which part goes where or what part the graphic actually represents. (The fact that parts for one section were spread throughout five different bags with no real logic to it didn’t help either.)

And, yes, people can misinterpret images. I have a cousin who was driving along (she is not mechanically minded) and saw a light come on in her dash that looked to her like an erupting volcano. Thinking it was something dire, she immediately pulled over and called her husband. He explained that it just meant she was out of windshield washer fluid.

As I talk to my daughter throughout the year, I will remind her of the hour and a half it took the two of us to put one toy together, so she won’t buy more toys with thousands of pieces.

My motto: avoid anything that has the words “assembly required” attached to it!