Editors – what is it that they do, exactly? Who are they? What motivates them? Why are they always so grumpy?

If you tell people, “I’m an editor,” you get this look. People have a vague idea of what an editor is and what an editor does, but they don’t really know. It’s like saying you’re a philosopher, theoretical physicist, or member of Congress.

Beth Hill does a nice job of breaking down what various editors do in her post “Duties of an Editor & How Editors Help Writers” on The Editor’s Blog. The only caution: don’t presume that each type of editor remains strictly within the description. 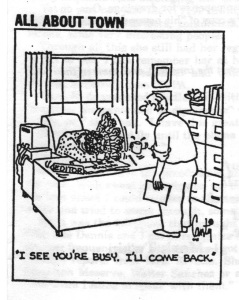 It doesn’t happen that way because good editors will always do what’s needed to coax the best out of the product. Besides, job titles are always such flimsy things.

Editors of writing love the English language. We love the stories; we love the words and their shades of meaning. We even love the grammar and punctuation.

We see the potential for excellence and do everything in our power, within whatever limitations, to get every piece of work to its shining best. It can range from a novel to an operating manual to a blog post, to a resume. We don’t care. We just want it to be right. (We’re compulsive that way.)

A writer bleeds and sweats over a piece and finally brings it to an editor. The writer is shocked when the editor starts hacking and cutting away like some crazed serial killer. The writer wants to snatch the piece back and flee, but it’s too late.

What the editor sees is a bloated, overstuffed piece that would be so much healthier with a little trimming. The editor knows readers won’t tolerate wading through heaps of literary garbage to get to the kernel of truth or usefulness.

Editors usually find themselves “betwixt and between” things. They stand between the reader and the writer. They represent the reader’s interest while preserving the voice of the writer.

Editors stand between writers and publishers. They want to develop the writer and show how a piece can be better, but they have to deal with the interests of the publisher and try to get a marketable piece out in a limited amount of time.

Yes, editors are grumpy sometimes. How would you feel if you had to deal with constant butchering of the English language? How would you like to always be able to see the greatness in writing without being able to accomplish it because of time, ego, or money? Isn’t it uncomfortable to be in the middle of two conflicting perspectives?

I have always loved the following poem tacked up on the wall of the newsroom I “grew up” in. I think it perfectly (and succinctly) describes what every editor yearns for.

The written word
Should be clean as bone,
Clear as light,
Firm as stone.
— Anonymous

4 thoughts on “Dissecting the Editor”